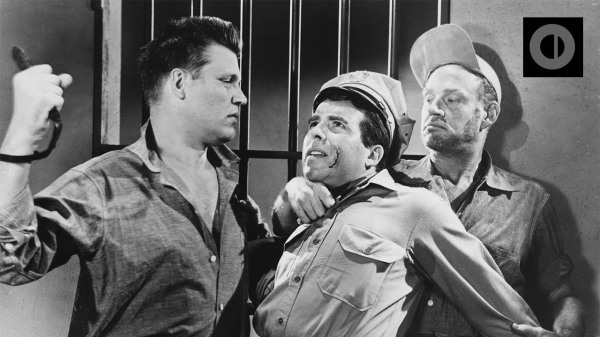 There’s no question that “Riot in Cell Block 11” looks like it was made in 1954. There’s something a little bit square about it, from the get-them-in-their-seats provocativeness of the title to the faux newsreel that opens the film, laying out its prison reform themes so baldly that nobody can miss them.

But dig down into “Cell Block 11,” and you find a potboiler drama that was both far ahead of its time and, in some ways, far ahead of ours.

It’s a prison-riot thriller for people who are genuinely concerned about the conditions in prisons. In today’s era, where the number of incarcerated people have doubled in 20 years, where private prisons for so-called “superpredators” are big business, where politicians offer bills to deny prisoners even televisions or exercise equipment, and where anybody who dares to bring these things up is accused to being “soft on crime,” “Cell Block” would be seen as rather radical. But producer Walter Wanger had spent time in jail, and was determined to bring those issues to light.

Neville Bland plays the de factor leader of the prisoners, locked up in a cell block that had been condemned two years earlier, where mentally-ill inmates (“the nuts,” in the film’s jailhous lingo) are jailed alongside the sane. Interestingly, the hard-nosed warden of the prison agrees with their complaints; the real culprits in this film is an indifferent state legislature and, by extension, an indifferent public.

Don Siegel (“Dirty Harry”) goes for a loose, documentary feel — “Cell Block 11” was shot at Folsom State Prison in California, and the seemingly endless corridors of cells are a powerful backdrop, making the inmates’ battle feel almost mythic. Siegel used actual inmates and guards to play the various background roles. When violence comes, it’s immediate and visceral, a sudden shank in the night rather than an obviously-staged fight scene. And the ending leaves a deliberately bad taste in the mouth, a hollow victory that illustrates the uphill climb that prison reform has to face.

Criterion’s new dual-format edition looks gorgeous, in lustrous black-and white. The primary bonus feature is a commentary track from film scholar Matthew Bernstein — it’s obviously pre-written, but he makes sure to pack the track with all sorts of useful background information on the film and its context, such as the Michigan State Prison riots that inspired the film. There’s also an essay Wanger wrote about his experiences in prison and an excerpt from Siegel’s autobiography about the making of the film, read by his son.