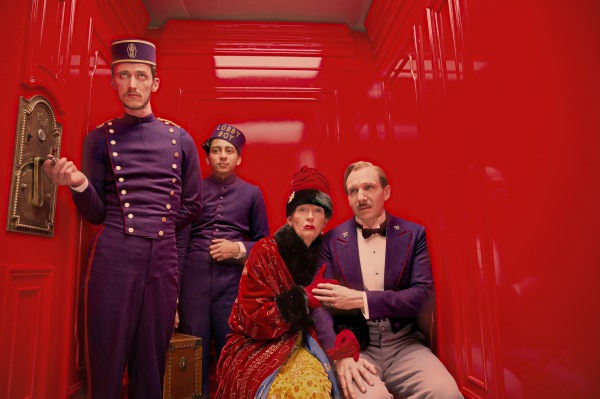 The movie at the creamy center of the confection that is “The Grand Budapest Hotel” is perhaps the most purely fun film Wes Anderson has ever made, outside of “Fantastic Mr. Fox!” Stolen paintings! Shootouts! Ski chases! It’s an unabashed yarn, with Ralph Fiennes as the elegantly flappable hotel concierge at the center of it all; Basil Fawlty, Man of Action.

But there are dark shadows that creep into the corners of this dizzy, silly story; it’s unusually violent for a Wes Anderson film, for one thing, with Willem Dafoe’s bulldog-like assassin dispatching innocents with a bloody zeal. And, of course, there are the encroaching double-Zs of the fascists, steamrolling over the old ways of life.

What really sets the film’s tone, though, is the framing device Anderson uses to open and close the film, nestling M. Gustave and Zero’s story in the middle of three other eras. Some might wonder why Anderson doesn’t just get on with it, but these frames are crucial; the movie telescopes into its central tale and then back out again, adding to the feeling that this is all happening in an era long ago, never to be seen again.

First, and seemingly in the present day, we see a student enter a wintry park, hang a set of hotel keys onto a memorial, and then sit down to read a pink-covered book. Anderson cuts from a shot of the memorial bust to the man himself, the Author (Tom Wilkinson) back in 1985. He begins talking to the camera, telling the story that we now assume is in that pink book. Now the film jumps back again to 1968, as we see the story that the Author is telling us.

The Author, now billed as Young Writer (Jude Law), is staying in the nearly vacant Grand Budapest Hotel, and strikes up an acquaintance with the elderly Zero (F. Murray Abraham), who owns the hotel. Over dinner, Zero begins telling his story, and the film jumps back again to 1935, and the central action of the film.

Anderson heightens the feeling of temporal distance by using three different aspect ratios for the layers of “The Grand Budapest Hotel.” The present-day and 1985 scenes are shot in the standard 1:85:1 widescreen format, while the 1968 hotel scene is shot in the wider 2:35:1 ratio. 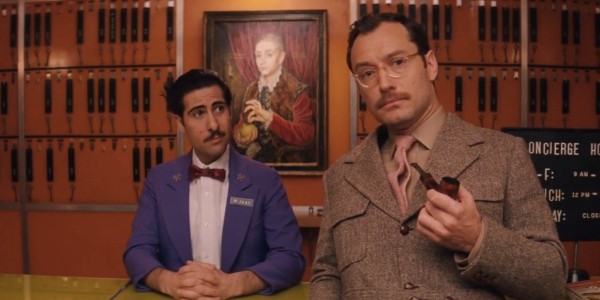 These ratios all match the cinematic formats of their era; films in the ’30s were shot in 1:37 (such as the film’s of Ernst Lubitsch, which Anderson cites as a big inspiration for “Budapest”) while 2:35:1 was especially big in the 1950s and 1960s, when movies first went widescreen and studios wanted to offer audiences something they couldn’t get at home on their televisions.

But I think there’s also an emotional reason for the different ratios. The compositions of the widescreen sections seem deliberately empty, with lots of blank space — a girl in a park, the Author in his large apartment, and especially the Young Writer knocking about that large, empty hotel. But then we get to the main story in 1:66:1 and the frame feels more crowded — with characters, with energy, with action.

Then, at the end, we telescope back out again, and the frames once again become empty, and we acutely feel the absence, the sense of loss. This may just be me, but sometimes I’ll be watching an old movie from the ’30s or ’40s in that boxy format, and suddenly think “Everybody in this movie is long dead.” Maybe that’s overly morbid, but I think that Anderson’s is pulling some of the same strings in the way he presents a bygone, long-lost era.

But perhaps not completely gone. As the film returns to the present-day, I now notice that the pink jacket of “The Grand Budapest Hotel” that the student is reading is the exact same hue as both the hotel’s former exterior and the Mendl’s pastry boxes we’ve seen earlier in the film. The slender chain of storytelling has found its next link.

Correction: An earlier version of this post said that the 1935 scenes were shot in 1:66:1. Critic Matt Zoller Seitz has since kindly pointed out that they are actually in 1:37:1. And he should know, since he wrote “The Wes Anderson Collection.”