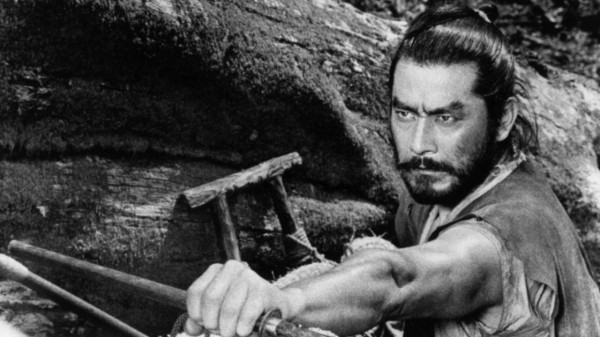 Akira Kurosawa’s “The Hidden Fortress” has long been considered a major influence on “Star Wars,” and there’s one scene I think George Lucas lifted directly from the film.

It’s near the beginning, when a wounded warrior runs up from behind the two hapless peasants as they’re trudging along the road, and then looks back behind him, towards, us, terrified. We can’t see what is scaring him so, until a half-dozen soldiers on horseback ride into the frame and kill him. Compare that to the iconic opening shot of “Star Wars,” in which a tiny transport ship comes onto the screen, pursued by a massive Star Destroyer.

Aside from that, I was a little surprised that “The Hidden Fortress” (which played at the Cinematheque at the Chazen Museum of Art series last November, and is now re-released by Criterion in a new Blu-ray edition) isn’t more of a “Star Wars” in feudal Japan. In his 2001 interview that accompanies the film, Lucas says the main thing he took away from “Fortress” of telling a big epic story from the point of view of two lowly characters — in this case, the droids C-3PO and R2-D2. Other than that, he says, most of the other seemingly similar plot points are just coincidences.

Maybe. Between the plucky princess in both films and the kendo/lightsaber duels, you could play Kennedy-had-a-secretary-named-Lincoln/Lincoln-had-a-secretary-named-Kennedy games with the two films all day. Or you could just enjoy “Hidden Fortress,” which is a relatively lighter and more purely fun adventure flim than most of Kurosawa’s output.

The two peasants are existing at the margins of the war when they get swept into a larger story. Rokurota (Kurosawa favorite Toshiro Mifune), a general on the defeated side of the war, promises them a fortune in gold if they’ll help smuggle it across enemy lines back home. But what he really wants to get home is Princess Yuki (Misa Uehara).

On the one level, “Hidden Fortress” is pure enjoyable spectacle, with Kurosawa using widescreen for the first time to its utmost, with dozens of extras in some of the bigger battle scenes, or elegant framing of the individual characters during quieter moments. Horses gallop off into the distance, Rokurota and the film’s villain square off in a showpiece kendo duel surrounded by soldiers in one bravura scene, and the grasping, cowardly peasants provide comic relief along the way.

Aside from a new 2K digital restoration that makes the film positively lustrous, the new Blu-ray edition includes a new audio commentary by film historian Stephen Prince. There’s also the Lucas interview and a 2003 documentary on the making of the film, “Akira Kurosawa: It Is Wonderful to Create.”

“The Hidden Fortress” isn’t great Kurosawa, but that’s just because great Kurosawa includes “The Seven Samurai” and “Rashomon.” But it’s a very good movie, perhaps his most conventionally “American” of all, and a great introduction into his work.