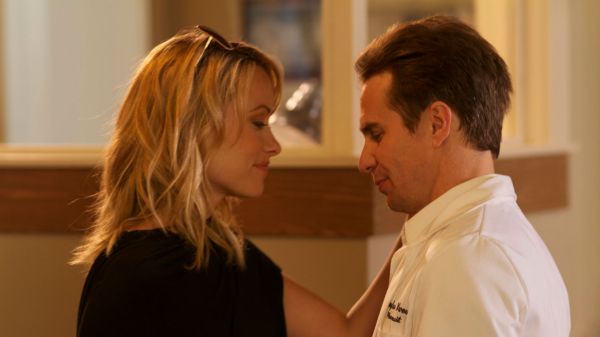 “Better Living Through Chemistry” opens with a clever credits sequence, as the camera glides over a HO-scale model town with every tree, every citizen lovingly reproduced in miniature — right down to the tiny plastic couple having sex by an open window.

Unfortunately, it quickly becomes clear that the characters in the movie aren’t much more realistic than the plastic figurines.

The film flirts with a classic noir concept of an innocent man pulled into a web of deceit and lies. Sam Rockwell plays that man, local druggist Doug Varney. Doug doesn’t command much respect in his little New England town —  his wife (Michelle Monaghan) is a hyper-competitive cyclist who leaves him in the dust both athletically and romantically, and his Goth son hates him. On the biggest day of his life, when his overbearing father-in-law boss (Ken Howard) retires and gives the family drugstore to him, he won’t let Doug change the name on the sign.

Salvation comes in the form of Elizabeth (Olivia Wilde), a bored housewife who would be racking up the Rewards points at Walgreens, so many pills does she pop. She charms Doug into giving her a little extra, and the two embark on a wild forged-prescription-enhanced affair. And somewhere in there, between the sheets, one of them first broaches the idea of what would happen if Elizabeth’s husband’s bad heart gave out.

So what we have here is the basis for a nice tawdry noir; Rockwell is perfectly cast as the nebbish unleashed, while Wilde is amusingly predatory. But here’s where “Chemistry” really gets weird — instead of following through on the courage of its convictions and have Doug sink deeper and deeper into darkness, the film abruptly flips around and tries to sell us that his prescription drugs-and-sex fueled escapades are actually some kind of character-building exercise that turns him into a better husband and father!

It is bizarre — a classic case of a film trying to have it both ways on an audience. Not helping either is a truly terrible voiceover narration by Jane Fonda as a (largely unseen) fellow resident whose monologues veer from needless profanity (because, as we all know, hearing old ladies swear is hilarious) and spewing unbelievably sappy bromides like, “Nobody can help everybody, but everybody can help somebody. Even if that somebody is yourself.”

Whatever that means, it may be true. But nobody can help this movie.