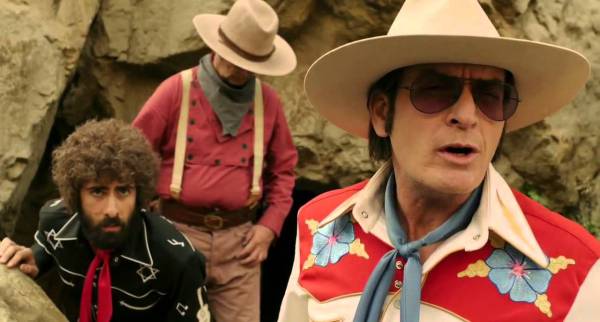 The end of the year is a time to celebrate the best of what’s come before. I wrote my Top 10 list of the best movies of 2013 for 77 Square, and its in print in Thursday’s issue and online. It was a great year for American movies. (I also talked about the best movies on Wisconsin Public Radio’s “Central Time” show Wednesday afternoon — the audio can be streamed here if you’re interested.)

But as Bret Michaels said, every rose has its thorn, and every “12 Years a Slave” has its “Paranoia.” So before we finally bid adieu to 2013, here’s a look back at the 10 worst movies of the year — the misguided, the disappointing, and the just plain terrible.

1. “A Glimpse Inside the Mind of Charles Swan III” — How can a movie made by Wes Anderson collaborator Roman Coppola and featuring Bill Murray, Jason Schwartzman, Patricia Arquette and Charlie Sheen not work? Exactly like this — “Charles Swan III” is an unqualified fiasco, with Sheen playing a smarmy graphic designer as some kind of romantic hero rather than the jerk he so plainly is. Art design substitutes for plot, character and emotion.

2. “Paranoia” — Put Harrison Ford and Gary Oldman in a high-tech thriller and you maybe got something right? Not if they’re background in favor of bland hunk Liam Hemsworth, unconvincingly playing a whiz kid caught in the middle of some corporate skullduggery over a next-gen smartphone. Shoddily assembled from parts of better movies, it’s like a knockoff you’d buy on the street — an “IPhoen 5.”

3. “Getaway” — Ethan Hawke made one of the best movies in the summer with “Before Midnight,” so he balances things out with this cruddy car-chase movie, with Selena Gomez spectacularly unconvincing in the passenger seat as a foul-mouthed hoodrat. The action is terribly staged and edited, except for one beautiful, two-minute tracking shot that tantalizingly suggests what might have been.

4. “Oz the Great and Powerful” — Of course it doesn’t measure up to the original “Wizard of Oz.” What’s surprising is that this “Oz” isn’t even as good as “Jack the Giant Slayer,” a wan cash grab prequel that features a lot of visual effects for no real purpose, a sleepwalking James Franco in the title role, and Zach Braff as a flying monkey.

5. “Elysium” — After Neill Blomkamp’s great sci-fi allegory “District 9,” it was just sad to see him fall so short in his big-budget outing, mishandling a potentially resonant metaphor about class inequality in the mix of an overplotted, overwrought and strangely hyper-violent action thriller.

6. “The Host” — Well, we can’t all be “Twilight.” This adaption of Stephenie Meyer’s standalone thriller about an alien invasion had plenty of moments of unintentional comedy, as a plucky teenage girl and the alien controlling her mind vyed for the same fella.

7. “Jack the Giant Slayer” — Nobody was asking for a “Jack and the Beanstalk” for older kids, but we got one anyway, a visual-effects heavy plodder that had little of the narrative or visual wit you’d expect from a movie in which magic beans play a key role.

8. “The Internship” — This was just kind of sad, watching “Wedding Crashers” Vince Vaughn and Owen Wilson deliberately tame themselves for a polite feature-length ad for Google.

10. “Passion“ — Brian De Palma’s ode to Brian De Palma was ostensibly a remake of the French thriller “Love Crime,” but mainly an excuse for him to indulge his favorite cinematic tropes without fear of whether they made any sense or not. Twin sisters, surveillance cameras, dream sequences — it was all there, but darned if I can figure out why.