“I Used to Be Darker” opens Friday at Sundance Cinemas. Not rated, 1:30, three and a half stars out of four.

In musicals, people sing when mere dialogue isn’t enough to express the emotions that they’re feeling. In that sense, Matthew Porterfield’s “I Used to Be Darker” follows those same rules. For the most part, the characters are closed off from each other, mumbling pleasantries or veiled insults instead of saying what they mean. It’s only within the safe confines of a song that they feel comfortable revealing themselves.

I really liked Porterfield’s 2006 debut, the slice-of-life “Hamilton,” which he brought to the Wisconsin Film Festival. His next film, “Putty Hill,” I found a little self-consciously artificial. But “Darker” feels like a leap forward, retaining Porterfield’s knack for naturalistic cinema while adding notes of beauty and empathy towards his characters.

Taryn (Deragh Campbell) is a young woman on the run from her family back in Ireland. She happens to land in Baltimore with her aunt Kim (Kim Taylor) and her family. Taryn remembers a fun, loving family of indie musicians from her last visit, but everything’s changed; Kim and her husband Bill (Ned Oldham, brother of musician Will) have separated, and their daughter Abby (Hannah Gross) is dealing and not dealing with the fallout.

We’ve seen divorce dramas from the inside, but having the audience view the wreckage of Abby’s family through an outsider’s eyes is very effective. As Taryn wanders through the house, seeing rooms piled with stuff, the everyday detritus of a family’s existence become artifacts from a past that’s now forever gone. The impact of divorce in ways large and small is keenly felt — there’s a scene where Abby has to find out which of her parents has custody of the waffle iron, which sounds funny, but is deadly serious. All her life, the waffle iron has been in that one kitchen drawer. And now it’s not. 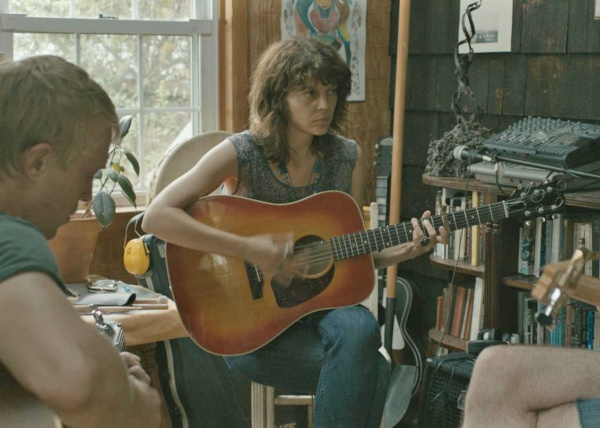 Music was a big part of this family’s life — both Kim and Bill were indie musicians, and while Kim is soldering on with her band in small clubs, Bill has left his music dreams behind for a regular job. Throughout the film, we see the characters playing music, listening to music, using music to connect to other people. The performances, all done live, are often eloquent and haunting, and reveal character. One of the sweetest and yet subtle moments in the film is when Bill walks into his daughter’s room and catches her watching one of his old ’90s videos on YouTube.

The actors are mostly “non-professional,” but I just can’t think of anything more you could ask out of their restrained performances. By the end of “I Used to Be Darker,” we really feel like we’ve spent time with these people, and that they have lives that will keep going on after the last song and the closing credits. In its understated way, like a solo acoustic song, there’s a quiet power here that sustains.

One thought on ““I Used to Be Darker”: Heartbreak in a minor key”