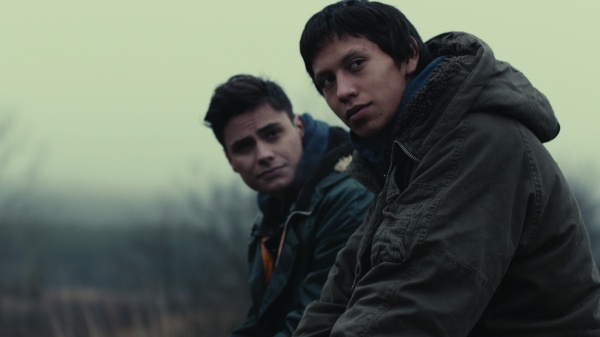 “The Lesser Blessed” screens Monday through Thursday at Point and Eastgate Cinemas. R, 1:30, two stars out of four.

Larry’s back and chest are covered in a network of ugly burn scars, his skin surface resembling the bleak landscapes of the Northwest Territories village where the First Nations teenager lives. And it also resembles the scars on his psychic landscape as well.

Writer-director Anita Doron’s well-acted but derivative coming-of-age drama, based on Richard van Camp’s young adult novel, makes the most of its unfamiliar setting, but is very familiar when it comes to its characters and plot points.

In his first film role, Joel Nathan Evans is effectively guarded as Larry, a teenager trying to survive high school. He has an unrequited crush on a girl, Juliet (Chloe Rose), and dodges the intimidation of a former childhood friend turned class bully (Adam Butcher). At home, his mom walks around as if in a fog, and the guy she’s currently seeing (Benjamin Bratt of “Law & Order”) may or may not be a positive influence on the family. Larry also has visions of the incident that got him so badly burned, which involved some sort of altercation with a man.

Note for note, it’s like a lot of other teen dramas — “Perks of Being a Wallflower” hit many of the same beats, right down to the hazy flashbacks of suppressed trauma that slowly crystallized into truth as the film progressed. Which is fine — genres tend to fall into patterns — but “Lesser Blessed” doesn’t have much to distinguish it from the pack other than it’s unusually dark and morose approach. Larry does eventually hit some kind of epiphany, but if you don’t look hard you might miss it.

Evans is fine and low-key as Larry, although saddling him with an intrusive voiceover narration seems to be a little much. The rest of the actors around him stick mainly to their types — it’s hard to see what Juliet has going for her besides her good looks. The only exception is Bratt — he keeps us guessing whether he’ll fall into the arrogant boyfriend type (as in Steve Carell in “The Way, Way Back”) or break the mold.