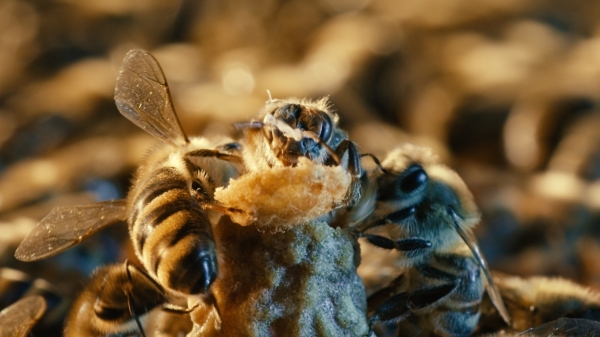 Friday was, frankly, too nice a day to spend inside a movie theater. But it was the one day I knew I could make it to Milwaukee for the 5th annual Milwaukee Film Festival. And at least I spent a lot of time outdoors in the two visually stunning documentaries I saw, “Breathing Earth” and “More Than Honey.”

“Breathing Earth” is the latest film from director Thomas Riedelscheimer, who made the wonderful “Rivers & Tides” about a decade ago about the work of artist Andrew Goldsworthy. Goldsworthy’s work was intended to work with the rhythms of nature, letting wind and water gradually erode them away. In “Breathing Earth” he focuses on another artist, Sunumu Shingu, whose work also depends on wind and water.

Shingu’s intricate geometric sculptures are like beautiful weather vanes, spinning and bowing and dipping according to the whims of the air currents. Shingu wants to use his work to celebrate something invisible in nature, and just watching them move is almost hypnotice. Riedelscheimer intercuts these images with gorgeous scenes of nature, wind ruffling through tall grass like a sheepdog’s fur, or an explosion of orange butterflies filling the sky, creating a contemplative and lovely viewing experience.

“Breathing Earth” is less successful in its narrative line, following Shingu’s attempt to build an entire village that runs on wind power. We follow Shingu and his wife from country to country, looking for a suitable spot to build the village, never quite finding the right one. It’s a little dull and pedestrian — far more interesting is Shingu talking about his upbringing, in particular the troubled older brother who inspired him to become an artist.

A stronger film overall was “More Than Honey,” which a film festival volunteer outside the Oriental Theatre said was already being called the “Chasing Ice” of 2013. It is a visually amazing film about the life of bees, with amazing close-up photography inside the hive, and even a jaw-dropping sequence from a bee’s eye view that follows another bee as it darts around a meadow. (That can’t be real, can it?) If ever a documentary deserved an IMAX 3D release, it’s this one.

What’s more, director Markus Inhoof’s film is fascinating as it tells about how bees think, and how their population is being decimated by a host of factors, all of them manmade. In their rush to get every larger and more profitable crops, commercial beekeepers have tried to domesticate bees into become docile little flying cows, with disastrous results for the ecosystem. Fortunately, Inhoof seems hope in, of all things, African so-called “killer bees,” which make pure honey and are too bad-ass to be messed with.

The festival continues until Oct. 10. For a complete schedule and other information, visit mkefilm.org.