“Don’t Stop Believin’: Everyman’s Journey” screens Monday through Thursday at Point and Eastgate Cinemas. R, 1:53, two and a half stars out of four.

In 1981, while Journey was packing arenas around the world on its “Escape” tour, the band’s future lead singer was a kid on the streets of Manila, singing for his supper.

Arnel Pineda grew up poor, and for a time was homeless, performing for spare change to live on. His unlikely journey to the spotlight is chronicled in Ramona S. Diaz’s engaging but shallow documentary “Don’t Stop Believin’: Everyman’s Journey.”

Steve Perry’s voice was the essential ingredient in ’80s hits like “Open Arms” and “Faithfully,” and he left Journey foundering when he quit the band in the mid-1990s. They went on with a replacement singer, seemingly chosen as much for his physical resemblance to Perry has his vocal resemblance, but when his voice gave out a decade later, the band was stuck.

Guitarist Neal Schon began trolling YouTube for a new singer, saw videos of Pineda performing Journey covers in a Manila nightclub, his voice an uncanny imitation of Perry’s. The band brought him over to San Francisco for a weeklong audition, and liked him enough to hire him.

It feels, I have to say, very un-rock ‘n’ roll and more human resources — the band had an opening, did a search for the best candidate and offered him a contract. It illustrates how a dinosaur of a band like Journey has become (maybe always was) a franchise, a brand, more than a creative endeavor. 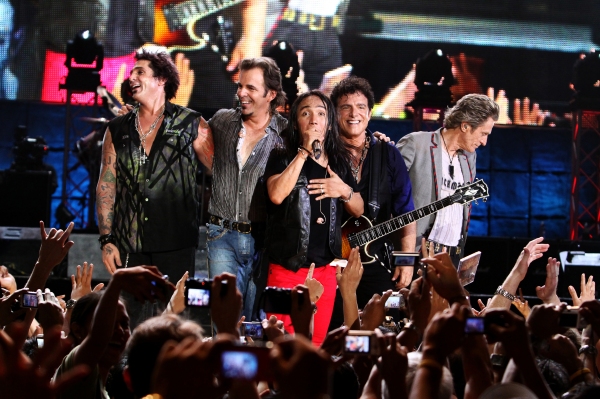 Still, the story is entertaining, especially when the charismatic Pineda tells it, describing his nervousness during the audition process, or his excitement at getting the gig. At first, some of the fans aren’t too comfortable with the idea of a Filipino-born lead singer (“It was better if he were from here” one fan tells Diaz), but once they hear him sing, they’re hooked. Pineda also has a dynamic, high-kicking stage presence that doesn’t go over too well with the band at first, probably because it underscores just how old and slow they’ve become.

Once this new Journey has become a success, “Don’t Stop Believin'” doesn’t have a whole lot more to say on the subject, and the second half of the film is mostly concert and backstage footage. You sense a gulf between Pineda and the other bandmates — they’ve been together for 40 years, while he’s largely a hired gun — but Diaz treads lightly there. In fact, we get little more than platitudes out of any of the original band members — only Pineda opens up to the camera about his uncertainties and fears.

She also doesn’t dig very deep into the very idea of a nostalgia rock band. Is there anything they get out of rocking out after 60 besides money, delivering people the same thing they sold them 30 years ago? The fact that the film doesn’t ask the question says a lot.