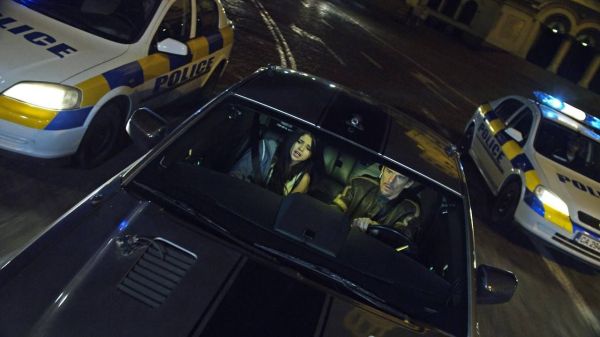 The good news about “Getaway” is that it always uses real cars and drivers. Unlike the CGI’d up action of other summer action movies, you can tell that those are real vehicles motoring at high speeds and bashing into each other.

The bad news is that it does not always use real actors or writers. The utterly ridiculous storyline (even by car-chase movie standards) attempts to leap over Snake Canyon-sized gaps of implausibility, and has a hilariously miscast Selena Gomez in a key supporting role as foul-mouthed hoodrat hacker.

Ethan Hawke, who has mouths to feed at home, plays Brent Magna, a failed race car driver living a quiet life in Bulgaria with his wife. But then she’s kidnapped by a mysterious villain (Jon Voight’s lips) who directs him to a souped-up, armored Shelby with cameras mounted on the inside and out. Over the course of one night, Brent has to drive that car and do everything that Jon Voight’s lips tell him to do, or Jon Voight’s lips will kill his wife.

Most of this involves seemingly random mayhem, where Brent smashes through parks, sending innocent people fleeing for cover, or smashing into Sofia’s endless supply of police cars, who pop up reliably every five to 10 minutes, like in a “Grand Theft Auto” game. Brent picks up streetwise hacker AND megabanker’s daughter Gomez, who is so burdened by the weight of this overwrought backstory that she can only muster out yelling “I hate you!” and “Let me out of here!” throughout the film. (Between her and Jon Voight’s lips’ constant directions to “Speed up” or “Turn left,” “Getaway” could be renamed “Backseat Driver: The Movie.”)

Of course, Jon Voight’s lips has a more nefarious scheme in the works, but nobody comes to a movie like “Getaway” for the plot. The film is the non-stop car chase delivery system as advertised, and while the chases are freneticallly, desperately edited to within an inch of their lives, that’s not the real problem. The real problem is director Courtney Solomon’s mystifying decision to use so much dashboard cams and other cruddy digital video, so that he’s cutting from one muddy, washed-out image to the next. Maybe he’s intending to capture the immediacy of a YouTube video, but it looks awful.

Except for one scene that shows what might have been, a beautiful, rolling first-person shot that last several minutes of cars weaving and dodging through suburban streets at dawn. I’d like to think it’s an homage to Claude LeLouch’s short film  “Rendez-Vous,’ which is poetry in fast motion. The rest of “Getaway” is clunky technical writing in motion.

One thought on ““Getaway”: A gullible audience gets “Taken” for a ride”