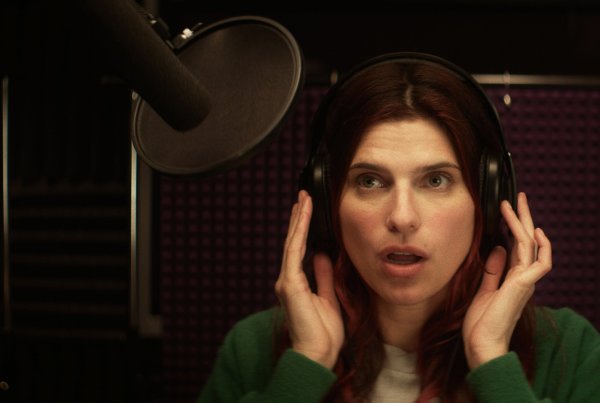 “Lean in,” Facebook executive Sheryl Sandberg famously advised women this year. To which Lake Bell would add, “Speak up. And not with a sexy-baby voice either.”

Bell’s sparkling debut as a writer-director, “In A World . . .” is a both a riotously funny screwball comedy set in post-production Hollywood and a pointed takedown of male chauvinism and the marginalizing of women. In one film, Bell, previously best known as an actress, has established herself firmly as a filmmaker with a distinctive, um, voice.

The “world” that Carol (Bell) lives in is the one of voiceover acting, in particular those voice-of-God narrators who used to be ubiquitous in movie trailers. Carol’s father Sam Sotto (Fred Melamed) used to be one of the giants of the industry, but also came second to the real-life Don LaFontaine, famous for the “in a world . . .” line, which he often seemed to be intoning from the bottom of a well.

LaFontaine really passed away in 2008, and the film suggests that his silence left a vacuum in Hollywood that every other voiceover artist wanted to fill. A job doing the trailer for a blockbuster “Hunger Games”-like “quadrilogy” has come up, and the studio wants to revive the “In a world . . .” line with a new voiceover artist. Sam, resting his golden pipes in retirement with a groupie second wife (Alexandra Holden) is considering getting back in the biz, but LaFontaine’s heir apparent seems to be the mellifluous Gustav Turner (Ken Marino).

Except, Carol wonders, why can’t a woman do movie voiceovers? Why do so many of the women around her speak in high-pitched baby doll voices, infantilized by the culture? Having been relegated to doing voice coaching for actresses (you try and teach Eva Longoria how to do a Cockney accent), she starts pursuing the quadrilogy gig, and runs into a wave of chauvinism. Especially from her father, a master of dulcet-toned mansplaining.

Bell is an engaging actress, and one who has a deft command of all sorts of dialects and accents, and her movie puts all her charms and talents on full display. But “In a World . . .” really sizzles in the writing, in its fast-paced dialogue, subtle feminist message and large cast of interesting characters, such as Carol’s tightly-wound sister Dani (Michaela Watkins) and her doting husband (Rob Corddry), and her lovesick sound engineer pal (Demetri Martin). There’s a lot of funny people in this movie who get to be really funny, and Bell knows just how and how much to use them, never letting one element of her sprawling story overpower the rest.

And I just love this insider’s look at the real Hollywood, far from the glitz, where engineers and editors toil behind the scenes in sound booths and editing bays, all those names you see midway through the credits. Bell also cleverly shows how the chauvinism of old Hollywood still lives, how old men with young girlfriends and fast cars still seem to get to make all the decisions.

By the end of “In a World . . .,” the film has delivered a smart and subtle message of female empowerment. reminding that the world’s a better place when hear from a wide range of voices, old and young, male and female. Bell is a filmmaker to be listened to.

One thought on ““In A World . . .”: Sisters are enunciating it for themselves”