But if Allen is outside his element shooting in San Francisco, so is his heroine Jasmine (Cate Blanchett), and the result is one of the nerviest, freshest films he’s made in a long time. Whereas some of Allen’s films seemed frozen in time (last year’s “To Rome With Love” could have been made any time in the last 50 years), this one feels rooted in the here and now, in the anxieties of the class struggle and the unmooring of social and financial institutions.

Jasmine was the wife of a smooth-talking financier (Alec Baldwin at his oiliest) who turns out to have been a Bernie Madoff-style fraud. Having ripped off all of their friends, Jasmine is forced to flee to San Francisco and her adoptive sister Ginger (Sally Hawkins). Who he also ripped off, but at least she’s family and can’t turn Jasmine away.

The scandal has deeply rattled Jasmine, who probably already had emotional issues, but kept them safely cushioned in the cocoon of wealth and privilege. Alone and exposed, crammed into her sister’s apartment with noisy kids and a hotheated suitor named Chile (Bobby Cannavale), Jasmine is slowly losing her grip. Sometimes, she’s determined to make a new life for herself, taking a job as a dentist’s receptionist and studying to be a interior designer. But she’s fragile, brittle, and the tiniest setback sends her off, prattling on about her old life as if she was still at a charity ball in Manhattan. But her rich friends are ghosts now, haunting her with memories of the life she lost. 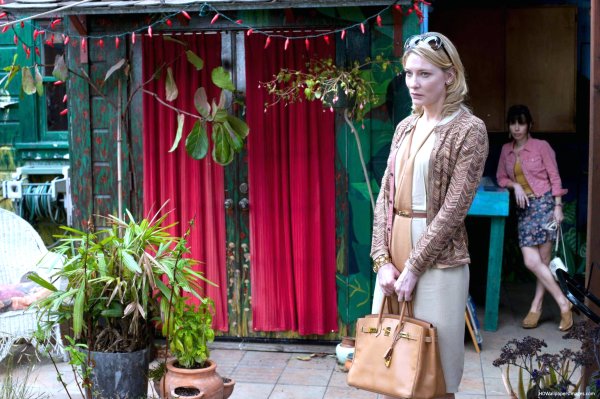 Blanchett is flat-out amazing as Jasmine, a woman of exquisite culture and breeding on the outside, a bottomless well of nervous need inside. At times, buffeted by the rigors of ordinary life, she seems almost catatonic, her big blue eyes searching desperately for escape. We should hate this woman, but we pity her. At one point, she meets an attractive diplomat (Peter Sarsgaard) who offers her the chance to rejoin the ruling class. For her own sanity, we start to wish that would happen, even as we recognize her capacity for self-sabotage.

This is one of those Allen films like “Midnight in Paris” where everything just clicks, from his confident staging and seamless uses of flashbacks to his impeccable casting. Hawkins gives her sister character a kind of brassy nobility, and Andrew “Dice” Clay is effective as her ex-husband, who is a voice of conscience in the film. That’s right: Andrew “Dice” Clay, voice of conscience.

The resemblance to “A Streetcar Named Desire” is intentional, but also inessential, as “Blue Jasmine” charts its own course through post-meltdown America, and how the rich really are so different than you and me. Or, at least, you can hide the differences with enough money.