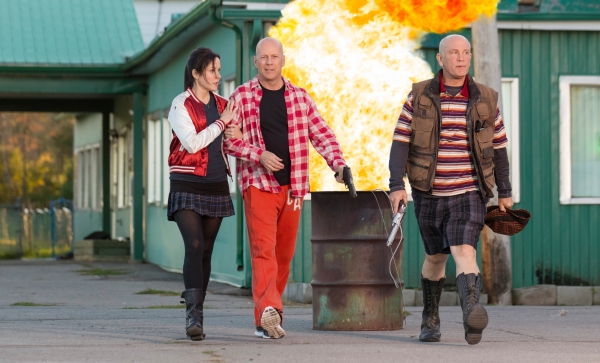 The biggest genuine laugh I got during the comic mayhem of “Red 2” was a throwaway moment midway through the film. The heroes, all retired Cold War-era spies, head to a safe house in Moscow that hasn’t been used since Yuri Andropov was their target. The loopy L (John Malkovich) finds an old Moon Pie in one drawer, and to the horror of the others, starts munching on the 30-year-old treat. “It’s from before they had sell-by dates,” he explains blithely to his horrified comrades.

That’s the central joke of the “Red” films, based on a graphic novel by Warren Ellis and Cully Hamner: these old-school spies all pre-date the sell-by date, too old to fit into today’s world of espionage, but too tough to be dismissed, either. While the first “Red” movie was an unexpectedly fun and wry ride, the sequel basically takes these same characters and throws them into a standard “Find the Doomsday Device, Save The World” sort of plot. It’s a letdown, and a waste of an opportunity to do something different with the action-spy genre.

In the ’80s, the CIA smuggled a mega-bomb called Nightshade into the Soviet Union, and then lost track of it. In 2013, a conspiracy theorist website reveals that Frank (Bruce Willis) and Marvin (Malkovich) were involved in smuggling Nightshade and escorting the scientist Bailey (Anthony Hopkins) who created it. Suddenly, everybody wants Frank and Marvin and the device, from the Americans (led by a chilly Neal McDonough) to the British (led by the returning Helen Mirren) to the  Russians (led by Catherine Zeta-Jones). Caught in the middle, Frank and Marvin hop from London to Paris to Moscow, looking for Bailey and Nightshade before any government can get its hands on it.

The one good thing about the “Red” series is that they serve as an employment service for veteran characters actors: the last movie also had Morgan Freeman, Brian Cox and Ernest Borgnine, and this one includes David Thewlis as an arms dealer nicknamed The Frog, as well as a blink-and-you’ll-miss-him appearance by the great British stage actor Steven Berkoff. 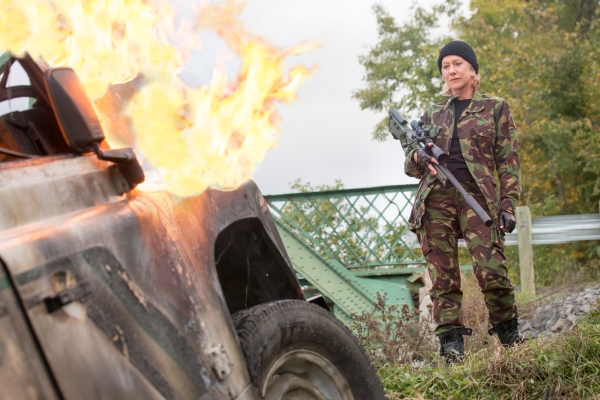 I do still enjoy Mary Louise-Parker as Sarah, Frank’s girlfriend, who gets a little too enthusiastic at the opportunity to engage in some “wet work.” And Willis manages to lose his usual mask of indifference and develop a nice, even tender rapport with her.

Much of the film is surprisingly low-key, dialing back the action and playing up the comedy, giving lots of screen time for Marvin and his increasingly silly outfits. When there is violence, it’s almost shockingly bloodless, even for a PG-13 film; we see someone get his throat slit and there is literally not a drop of blood spilled somehow. (The sets, meanwhile, don’t fare as well, getting Swiss-cheesed by automatic weapons fire in scene after scene.) And the product placement is distracting: there may in fact be a Papa John’s across the street from the Kremlin, but I don’t want to know about it.

Director Dean Parisot (“Galaxy Quest”) clearly wants to make a light, farcical action-comedy, but when the comedy is only so-so and the action is so rote, that makes for a film that’s mildly diverting at best.