“Somm” screens Friday only at the Madison Museum of Contemporary Art. Unrated, 1:33, three stars out of four.

Do you love wine? Are you the sort of person who swishes the liquid in the glass, holds it up to the light, pronounces it to be redolent of “black currant, baking spices, and freshly opened tennis balls.” If so, then Jason Wise’s “Somm” is your kind of documentary.

But even if you buy your wines on clearance at Target, you might find yourself swept up in Jason Wise’s engaging film. Because it’s really more about guys who live and love wine, and their quest to be recognized among the elite wine experts of the world.

(UPDATE: I just learned Monday afternoon that the Madison Museum of Contemporary Art screening and wine tasting set for Friday has been cancelled. Bummer. “Somm” is still on iTunes to rent or buy, so uncork your own favorite wine and do a tasting at home, won’t you?)

Four young men are preparing to take the master sommelier test, a grueling three-part exam that only 200 people in the world have cleared. The first part is a general knowledge exam on wine and spirits, the second part is a service exam where the applicants have to role-play in a mock restaurant.

It’s the third part that’s the killer — a blind tasting of six wines, three red and three white, that could come from anywhere in the world. Years of knowledge, experience and developed senses all come together for these wine stewards in those few minutes.

No wonder it’s such an obsessive goal, one that causes the men to put aside their regular lives (including long-patient girlfriends and wives) to taste and taste again, preparing for the exam. Some of the tasting scenes confirm the stereotype of wine nerds as almost comically overwrought about wine; we see wine snobs take a swig and declare that it has notes of “Grandmother’s closet” and “freshly-cut garden hose.” (Who cuts a garden hose?)

But Wise’s film is as much about the type of personality that would commit themselves to this kind of quest, and the strain that such shared ambition can put on friendship. They’re not the effete, bloodless caricature we have of wine snobs, but driven, at times arrogant young men; you could just as easily imagine them training to become surgeons or trial lawyers as sommeliers. 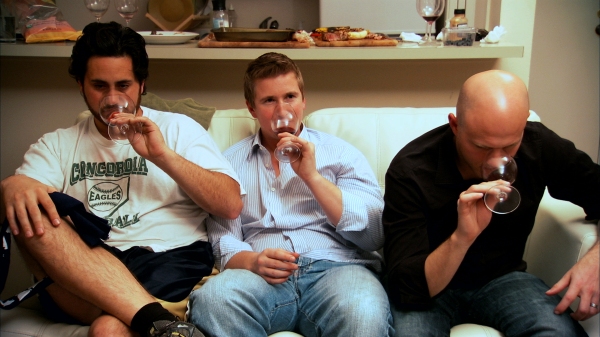 Wise follows the four men in the last few weeks of preparation before the exam: the type-A Ian Cauble is a bundle of nerves going over index cards every waking moment, while the more laidback Brian McCorkle worries about the worst-case scenario — that all but one of the friends will pass, leaving the other behind.

The suspense builds effectively as the four men head to Dallas for the exam, and then — Wise’s cameras are prevented from going inside the exam. That’s a little frustrating, although the scenes of the men torturing themselves as they wait for the results, nervously comparing their choices in the blind tasting, almost make up for it. When the results do come in, some surprises are in store.

“Somm” is an enjoyable portrait of these men, as well as a sincere evocation of their deep appreciation for wine. As Cauble puts it eloquently at the start of the film, a tasting is one of those rare moments where he can experience life entirely through his senses. Although you can’t blame one guy when, at the height of his preparations, he dreams of going off on vacation — and having a beer.