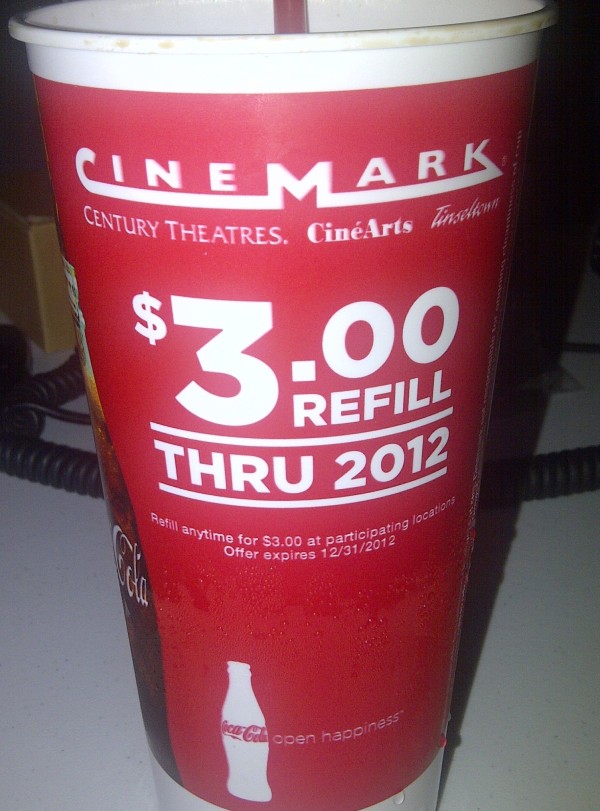 Now I’ve seen everything. AMC Theatres sent out a press release Monday touting its updated app, and along with the expected bells and whistles, such as linking it to their AMC Stubs rewards account was something called RunPee.

The premise behind RunPee, which began as a website (RunPee.com) and then a 99-cent app of its own before being folded into AMC’s, is that everybody needs to go to the bathroom at some point during a movie. (This may be the final stake in Mayor Bloomberg’s war against oversized sodas, as the populace adapts to consuming gallons of carbonated fluid rather than cutting back.) But nobody wants to miss three or four minutes in the middle of the movie.

So the original RunPee app would vibrate at a certain point midway through the film. It gives you a four-minute window to go to the bathroom (your mileage may vary) and then gives you a summary of those four minutes of plot. The AMC version doesn’t vibrate — it just tells you when to go and what you missed. This is something grown men and women are supposed to need.

For example, for “World War Z,” RunPee gives you three options of when to flee for the restroom. At 49 minutes in, your cue to leave is when Mireille Enos says “Gerry, I tried to call you.”  Go relieve yourself, and the app tells you that you missed the part where Gerry lands in Jerusalem and learns the Israelis have used giant walls to keep out the zombies. (Which seems kind of important to me, but whatever. RunPee seems more concerned that you don’t miss an action sequence than any actual plot.)

RunPee, in other words, is for that small subset of moviegoers who apparently check their phone regularly during the movie and yet can’t bear the thought of missing two minutes of a movie. And if AMC is officially sanctioning this, can we do away with the pre-screening admonishments about talking and using cell phones in the theater? It seems like letting your phone tell you when to go to the bathroom during a movie starts us down a slippery slope indeed.

Also, I couldn’t help noting that while “World War Z” offers three RunPee moments, “Monsters University” offers only one, which leads me to think the RunPee people have never seen a movie with a child. I would need RunPee options every five minutes if I had a kid in tow, just in case. Also, RunPee doesn’t seem to solve the problem of somebody in your row barging past you in the middle of the movie to go to the bathroom. Maybe RunPee 2.0 could sync up the phones in a given row so that everybody goes at the same time.

It seems like a silly concept to me, but AMC must like it enough to include it in their new app. Another, simpler option might be to simply go before the movie starts, or else not consume a beverage that’s the weight of a small child during the film. But how much fun is that?

One thought on “AMC Theatres launches RunPee, for those who need their phone to tell them when to use the bathroom”