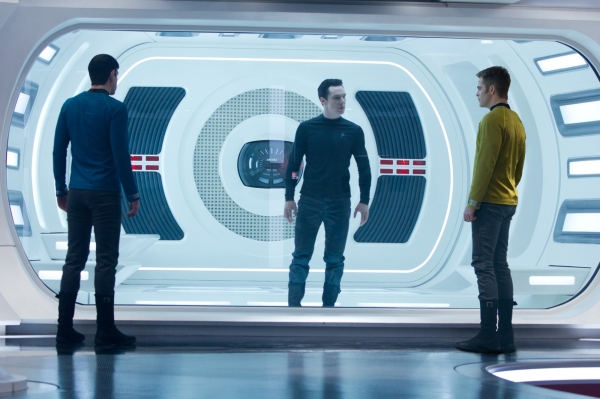 “Star Trek Into Darkness” opens Thursday at Point, Eastgate, Star Cinema and Sundance. PG-13, 2:08, 2 and a half star out of four.

I hate to be that guy. It’s no fun to be the humorless fanboy who can’t just enjoy the latest installment in a franchise, but has to hold it up against everything that has gone before. But, as a lifelong “Star Trek” fan, of the sort that used to hold his little audiocassette recorder up to the console TV as a kid to record “Amok Time” and “The Trouble With Tribbles,” it’s hard not to.

So, while “Star Trek Into Darkness” is a fun ride that captures a lot of what made the original series so enjoyable, I couldn’t help feeling let down. Not because J.J. Abrams and his writers have ignored what “Star Trek” fans want. It’s that they’ve pandered to it to such a degree that it feels less like fan appreciation and more like base-covering pragmatism. Add to that the usual summer-movie pandering to audiences who want lots of big explosions and people dangling from ledges (seriously, that engine room has to violate every 23rd-century OSHA requirement in the book), and you’ve got a film that’s surprisingly timid.

Disappointing, because Abrams’ 2009 “Star Trek” reboot was such a triumph. I was extremely skeptical going in  of the idea of reviving Kirk, Spock and company with a new young cast, but Abrams and his writers captured the human element that made the series work, the banter between Kirk, Spock and McCoy, the sense of optimism and humanism that pervaded Gene Roddenberry’s visit. Add in a rather elegant way of using time travel — a recurring theme in the series — to justify the reboot, and it felt like “Star Trek” was well and truly rejuvenated, ready to boldly go forward.

And then we have “Into Darkness.” An ex-Starfleet officer named John Harrison (Benedict Cumberbatch) has gone rogue, engineering a bombing in London and an attack on Starfleet headquarters. He hides out in a deserted part of the Klingon homeworld, and Admiral Marcus (Peter Weller) sends a revenge-seeking Kirk (Chris Pine) and his crew on a mission to assassinate him. The crew, especially the moralistic Spock (Zachary Quinto), has deep misgivings about the mission, but the hot-blooded Kirk wants atonement for a personal loss. The film is obviously aiming at a kind of post-9/11 allegory, not because it has anything to say about the War on Terror, but because “Star Trek” always does allegory, right? Again, it feels like pandering to a fan base that Abrams doesn’t quite get.

Where the plot goes from there shouldn’t be spoiled (although I want to write about “Into Darkness” again in a week or two), except to say that the plot basically revisits one of the classic episodes of the series. Winking at old fans is fine — I’m a sucker for a Gorn reference or a Tribble cameo as much as the next Trekkie — but “Into Darkness” basically becomes a retelling of that story, down to the point that screenwriters Roberto Orci, Alex Kurtzman, and “Lost” co-creator Damon Lindelof rehash familiar scenes and lines of dialogue almost verbatim. There’s nothing new here, and what’s old isn’t done nearly as well as it was the first time around.

Which is not to say that, moment to moment, “Into Darknes” isn’t a fun summer movie to watch. There are some great action sequences, such as Kirk as a human torpedo getting shot from one starship to another, navigating a debris field in between. And there’s a masterful visual effects sequences with the Enterprise in free-fall, the characters falling and running onto corridor walls and ceilings as the ship tumbles helplessly into orbit. (It’s quite an upgrade from the old TV series, where they’d just shake the camera and the actors would lurch back and forth in unison.)

And the character work is great — I felt a huge wave of satisfaction, 40 minutes in, when the entire crew finally settled for the first time at their usual posts on the Enterprise bridge. Pine makes a fine, swaggering Captain Kirk, although at some point he’s got to lose that reckless-hothead image and start acting like a Captain. And Quinto makes an ideal foil, able to both play straight man to Kirk’s quips and top them, drily. They act more as friends here than in the first movie, and that’s an appropriate and necessary step forward.

The screenplay also gives all the supporting characters a scene or two to shine; Scotty (Simon Pegg) gets to skulk around an enemy ship, while McCoy (Karl Urban) grouses entertainingly and Sulu (John Cho) gets to sit in the captain’s chair a little. Cumberbatch is marvelous as the imperious, mysterious Harrison, although the film hedges on the real depths of his villainy to suit the machinations of the plot. (Abrams had the same problem with his last film, “Super 8,” in which the alien would turn from misunderstood “E.T.”-like vagabond to ruthless killing machine and back again, depending on whatever the particular scene needed.)

After finding the right emotional ending, though, you can almost feel Abrams panic, and “Into Darkness” adds on yet another climax, with more big explosions and more chase-fight-dangle. I can’t imagine the next “Star Wars,” which is near and dear to Abrams’ heart, will be like this. He seems to be saving himself, cautiously maintaining the “Trek” franchise until he can pass it off to a director with a little more skin in the game.

Like I said, “Into Darkness” isn’t bad, but it’s a missed opportunity to be more than the summer blockbuster of the week, spiced with winking asides at the “Star Trek” faithful. At the end of the film, we get the promise that the Enterprise will finally, finally embark on its five-year mission. I hope they find something new out there.

16 thoughts on ““Star Trek Into Darkness”: A rather cynical Enterprise”