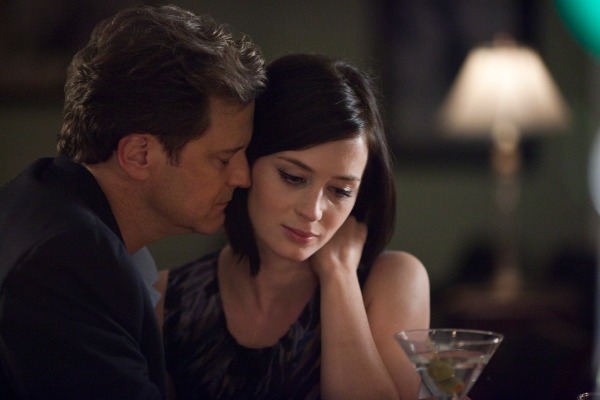 “Arthur Newman” is now playing at Point and Star Cinema. R, 1:41, two stars out of four

If acting was real, they wouldn’t call it acting. There’s artifice in every performance, but it’s seldom seem more pronounced in the comedy-drama “Arthur Newman,” in which two fine British actors pretend to be two Americans pretending to be other people.

The cramped drama was first written by Becky Johnston (“Seven Years in Tibet”) and only finally makes it to the screen now with first-director Dante Ariola. Both Firth and Blunt are fine actors, and likely leaped at the chance t work together and play two roles far removed from their usual coterie. But the parts are so underwritten, and given so little to do, that the actors connect with each other and the material only intermittently.

Firth is Wallace Avery, a sad-sack Floridian with thwarted dreams of being a pro golfer. One day, on the course, he gives a rich man some pointers on his slice, and on the spot invents a new identity for himself — Arthur Newman, golf pro, just back from years working at some of Asia’s finest golf course. The rich man happens to own a country club in Terra Haute, Indiana, and offers him a job.

So Wallace jettisons his old life, including a girlfriend (Anne Heche) and teenage son (Sterling Beaumon), makes up a complete new identity for Arthur, and hits the road for Indiana in . . . of course . . . a convertible. Along the way, he comes across Mike (Blunt), a pickpocket and drifter who has severe emotional problems. We know that because she keeps telling Arthur about her severe emotional problems, and because she wears a hoodie a lot.) Mike likes this reinvention thing Wallace/Arthur is trying, so she hops in the convertible with him.

The couple head cross-country, stopping along the way to break into people’s houses, dress up in their clothes and have sex. I’ve nothing against role-playing in the boudoir, but couldn’t they rely on their imagination a little more. Obviously the theme of “Arthur Newman” is the American dream of starting over, but Johnston’s screenplay hits it so obviously that it loses its resonance. Thuddingly off-key moments abound, such as a scene in a restaurant when Arthur remembers choking on a championship putt that ended his golf career, and HE STARTS CHOKING ON A MEATBALL.

Blunt slips into her rest-stop klepto role more easily than we might expect, but Firth seems to have more trouble with his American accent, hitting his Rs so hard  you’d think they owed him money. But Arthur is drawn so willfully bland that we can’t work up much sympathy for him. I’m also mystified by the occasional scene back in Florida where we see Arthur’s son and girlfriend wondering where he is, which trip up the momentum of Arthur and Mike’s journey.