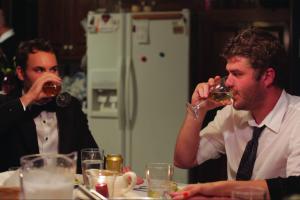 If the title “Awful Nice” doesn’t sound familiar to you from your first mad dash through the 2013 festival calendar, that’s because it probably wasn’t there. Festival programmers just booked Todd Sklar’s film last week, after the calendar had gone to press.

It shouldn’t get lost in the shuffle, because this has to be one of the funniest films at the festival. And not just the sort of knowing-chuckle funny that one expects from indie comedies about estranged brothers, but huge, rolling waves of laughs. I watched “Awful Nice” in probably the most unfriendly environment for a comedy — on Vimeo, alone, on my desktop — and I was rendered helpless from laughing again and again. Sklar and Rennie have connected indie comedy to the tradition of broad slapstick humor, of punches thrown and windows smashed, and it’s just a riot.

“Awful Nice” is at heart rooted in a familiar tale of estranged adult brothers. Jim (James Pumphrey)  is the responsible one, a failed author with a family to support. Dave (co-writer Alex Rennie) has always been the family screw-up, drifting from one failed scheme to another, convince that his childhood collection of sports memorabilia will make him rich someday. How’s that plan working out for him? In the opening scene, Jim descovers Dave passed out naked in a wigwam, surrounded by strewn peanuts and a live tarantula.

Their father (nicknamed “The Colonel” for unspecified reasons) has just died, and Jim wants to drag Dave back to Kansas City for the funeral. For $150, Dave agrees. They haven’t seen each other in years, and always seem one careless remark away from a drag-out fistfight. Unfortunately, it seems the only remarks Dave knows is careless remarks, and the two grown men keep erupting into hilarious scuffles, looking like two kids wrestling in their parents’ rec room. The first act of “Awful Nice” is hilarious because of that constant button-pushing tension between the two brothers. There’s one fantastic, bizarre scene at a family dinner when Jim and Dave suddenly get into this bizarre drinking contest, madly gulping down every liquid on the table — beer, water, gravy — before devolving into the expected fisticuffs. They’ve never evolved past the “he did it first!” phase of brotherly relations.

The boys have to go down to Branson, Missouri to sell the family lake house, and find it trashed beyond belief. Dave decides it’ll be a great bonding experience if the brothers fix up the place, and Jim reluctantly agrees. The only problem (okay, one problem among many) is that neither has any idea how to do home repair. So instead they putter around the house and then head out on the town, getting sucked into Branson’s seamy underbelly (as opposed to its seamy overbelly), including British prostitutes and Russian mobsters.

“Awful Nice” plays it really broad at times, and Jim and Dave often reminded me of nothing more than classic slapstick comedy duos — the slow-burn straight man Jim as Bud Abbott, excitable loser Dave as Lou Costello. And, come to think of it, there has to be a “Three Stooges” short where the numbskulls had to fix up a house, right? Also, the supporting characters play things gleefully over the top, including comedians and podcast favorites DC Pierson and Brett Gelman as Russian mobsters, and “Law & Order: SVU” star Christopher Meloni, wearing the worst hairpiece you will see at the Wisconsin Film Festival, as The Colonel’s old business partner.

But as wild and silly as the movie gets, it still connects to the age-old tale of sibling rivalry, of how family relations bring out the worst and best in everyone. It’ll be a blast to see with a full house at the festival.