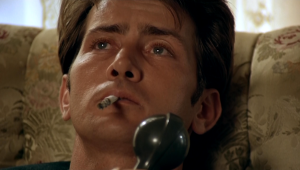 While watching for the first time, Terrence Malick’s 1973 debut film “Badlands,” I knew I should be reminded of other landmark films featuring road-tripping, serial-killing lovers, such as “Natural Born Killers” and “Bonnie & Clyde.”

But those weren’t the movies that came to mind as I watched the film, just out on Blu-ray in a fascinating new edition from the Criterion Collection. The movie I kept being reminded of was “Moonrise Kingdom,” Wes Anderson’s hit from last summer.

Both movies are about young couples on the lam, with misunderstanding adults close on their heels. Both movies conjure up a wistful reverie about first love and vanishing innocence. Both movies use the natural world as a vivid backdrop, an idyll that the “civilized” world can’t reach.

Granted, 12-year-old Sam Shakusky never shot anyone in the back. But “Badlands” is surprising and disturbing because it drenches such a violent story in such romantic reverie. The film is based on the real-life killing spree of 19-year-old Charlie Starkweather in 1959, now fictionalized as Kit Carruthers (Martin Sheen), a James Dean-lookalike who acts as if he’s acting in a James Dean movies, being watched, always. At 31, Sheen is a little too old for the part, but that works in his favor, suggesting that, beneath the pompadour and practiced swagger, this is an unstable man unready to finally leave adolescent passions and rages behind.

In the vein, it makes sense that Kit picks 15-year-old Holly (Sissy Spacek) for his girlfriend and, later, partner in crime. “Badlands” is told literally and aesthetically from Holly’s viewpoint, with her earnest, unaffected voiceover seemingly ripped from the pages of her diary.

That guileless perspective gets contrasted against the brutality of Kit’s crimes; he starts by shooting Holly’s father and burning down her house, and later victims include three bounty hunters and, most disturbingly, an innocent couple who Kit needlessly guns down after locking them inside a storm cellar.  Kit is starring in a movie in his mind, while Holly starts to realize, slowly, that he’s more than just “trigger-happy.” Take away the violence, and “Badlands” is a complex look at a relationship’s rise and fall, as the lovers slowly drift away from each other. It’s not the law that breaks them up, it’s the end of innocence.

What’s striking about “Badlands” is how much of Malick’s aesthetic appears fully realized in his debut film. The languid pacing, the silent, unrealized longing of its characters, and especially the gorgeous imagery of nature found throughout the film. The new HD transfer for Criterion revitalizes the film’s beauty, particular in a sequence in which the couple hides out in the forest, building themselves a treehouse like Robinson Crusoe. It’s like a dream, right down to the Maxfield Parrish print hanging on the wall of the clubhouse. But the dream can’t last long.

Malick is absent on the DVD extras, although he amusingly turns up in a small cameo in the film as, fittingly, an architect; hard to imagine the reclusive auteur ever making that kind of public appearance again. The highlight of the Criterion extras is a 42-minute documentary, “Making ‘Badlands'” which includes present-day interviews with both Sheen and Spaceck about making the film and how it launched their careers. Sheen tells a lovely story of, having just gotten the part, driving down Pacific Coast Highway, and then pulling off the road and weeping with “uncontrollable joy” that, after years of struggle, he had gotten the part of a lifetime.

He was right. Although both Spacek and Sheen — and of course, Malick — would go on to great careers, there’s something strange and special about “Badlands.” The Criterion Collection edition makes for an excellent opportunity to discover it.