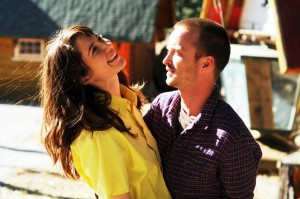 Kate is a charming twentysomething living in Los Angeles, fond of peasant dresses, indie rock and devoted to her kindergarten class. Sure, she’s also devoted to her booze; in the opening credits of “Smashed,” we see her with a bottle of beer in the shower and a nip from a flash before she enters school. But she’s not like an “alcoholic,” right?

James Ponsoldt’s excellent and insightful drama challenges our preconceptions of what drunks look and act like. The addiction drama is well-worn territory for movies, but by staying truthful and not melodramatic, “Smashed” finds a way to make an alcoholic’s descent and recovery feel like fresh territory again.

Mary Elizabeth Winstead is indeed completely likable as Kate, and she and her trust-fund husband Charlie (Aaron Paul) make exactly the sort of couple we’d like to hang out with on a Saturday night. Kate is high-functioning, until one morning in class when she vomits into a wastebasket. She panicks and tells the principal (Megan Mullaly) that it’s morning sickness, but the vice principal (Nick Offerman, Mullaly’s husband) is himself a recovering drunk who knows what he sees. He offers to become her AA sponsor, but she’s in complete denial about her problem.

She finally realizes the extent of her problem after a terrible night in which she tries smoking crack for the first time and ends up sleeping on the street. What’s extraordinary about this sequence is that it’s presented so clearly, not in a boozy “Lost Weekend” sort of haze but in a very real series of small, bad decisions fueled by alcohol.

“Smashed,” written by Susan Burke, is just as wise about recovery. The world of bad coffee, store-bought cookies and 12 steps is just so . . . uncool compared to Kate’s former life. But she learns to listen to her fellow addicts (including Offerman, terrific in a mostly dramatic role, and “The Help” Oscar winner Octavia Spencer) and recognizes herself in their stories. But as she bonds with them, she starts pulling away from Charlie, who can’t understand why she can’t just continue with their freewheeling lifestyle, with all the same friends and parties, and just not drink. But that’s the painful truth at the core of “Smashed”; in order to build a new life, you might have to tear down parts of the old life that are hard to part with.

In the end, the film doesn’t treat sobriety as any sort of magic solution, and Kate ends up with more problems sober than she had drunk. But at least now she’s facing them, honestly, and there has to be some kind of triumph in that.