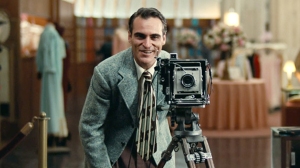 Keith Phipps had a delightful piece in the Atlantic Online this week about the “irresistible perils” of watching deleted scenes. The occasion was the release of “The Master” on DVD and Blu-ray, and the Blu-ray edition has a 20-minute collection of deleted scenes called “Back Beyond.” The most arresting seems to be a scene where Freddie (Joaquin Phoenix opens the mysterious case that Lancaster Dodd (Philip Seymour Hoffman) opens in the desert, only to see flames.

Phipps’ article is about, in a nut shell, “Do deleted scenes count?” That is, should we accept or reject them as part of what we know about the movie, that the missing pieces of information found within those scenes should be connected up to the rest of the story?

“Deleted scenes belong to a space that’s neither part of the film nor removed from it, one perhaps better left unexplored,” Phipps writes. “I’ve come to think of deleted scenes features as the equivalent of that box given to Freddie to guard (or the one given to Pandora): a thing better left unexamined but impossible to resist.”

I have the same love-hate relationship with deleted scenes. Some, like for comedies, are pure fun; Judd Apatow always shoots way more than he can use on his films, so the DVDs are a treasure trove of ad-libs, alternate takes, even entire characters who couldn’t make it into the finished product. But they feel “bonus” in every sense of the word — fun, and extranous, like those deluxe-edition tracks on CDs that exist in a separate place from the main album.

Other deleted scenes are more problematic. The worst is when a scene is so wrongheaded that it can’t help tarnish the original movie a little, like that awful original ending to “Clerks,” in which Dante is abruptly shot and killed by a robber. It’s the kind of disastrous, faux-“edgy” choice that only a first-time filmmaker can make, and thankfully Kevin Smith was talked out of it before “Clerks” came to Sundance.

But even if the new footage doesn’t hurt the film, it never quite fits right. I watched the new extended cut of “The Good, the Bad and The Ugly,” which includes about 12 minutes of restored footage (with actors Eli Wallach and Clint Eastwood dubbing in their dialogue just a couple of years ago, which is jarring to say the least.) It’s one of my favorite movies, so what’s wrong with a little bit more? And the scenes do fill in some gaps, such as explaining how one character got from Point A or Point B.

The problem was that I had seen the original version so many times (at least twice a year on my local Fox affiliate’s “Eastwood Week” as a kid in Denver) that I had the rhythms of the movie down cold, almost on a subconscious level. To add in that extra stuff disrupted those rhythms. I couldn’t just sink into that movie the way I had done so many times before.

“Making small tweaks to a movie is one thing; completely changing the content and tone of an ending is another. These sorts of deleted scenes recall the classic William Goldman line that ‘Nobody knows anything.’ In these cases, deleted scenes make great movies look like some kind of cosmic fluke — a random happenstance of timing and focus group scores.”

See, I have the exact opposte reaction. Because those scenes, to me, show the creative process in all its messy glory. It can be incredibly inspiring to see that your favorite movie didn’t come to your favorite director via a bolt of pure instinctive genius, but was hammered out made through a series of false starts, catastrophic errors, unnecessary scenes, blown chances. And yet somehow, in the editing process, all the chaff was finally stripped away, the rough edges smoothed over, the thing somehow finally coming together.

Sometimes, when you’re stuck in your own creative process, sandblasting with your forehead (to steal a great line from novelist Richard Bausch) inch by inch through a project, what pushes you forward isn’t seeing someone else’s sculpture up on the pedestal. It’s the scraps on the floor.