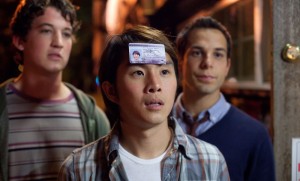 It may not feel like spring outside, but the calendar does say March 1. And that’s all the excuse Hollywood needs to kick of the spring movie season. So the low-profile dramas and comedies of January and February that the studios had little hope for will start giving way to some semi-blockbusters that the studios hope will generate some big box office.

“Jack the Giant Slayer” (Point, Eastgate, Star Cinema) — When “Hansel & Gretel: Witch Hunters” came out in January, the 77 Square graphic designer Brandon and and I were joking about what fairytale would be next. And I jokingly suggested “Jack and the Beanstalk,” imagining a poster with the tag line “Fee Fi Fo Summer 2013.” They took everything but the tagline.

“The Last Exorcism Part II” (Point, Eastgate, Star Cinema) — My favorite movie title in quite some time. If the first movie had the last exorcism, then how can there be a Part II? Unless “last” didn’t refer to “final,” but merely “The Previous Exorcism,” or “The Most Recent Exorcism.” And that didn’t look too good on a poster.

“21 & Over” (Point, Eastgate, Star Cinema) — The writers of the “Hangover” movies make a raunchy R-rated comedy about three buddies out on a night of drunken debauchery, in which their straight-laced buddy ends up getting the wildest. But this time, the friends are college-age. So it’s completely different.

“Phantom” (Point, Eastgate, Star Cinema) — It’s been ages since we had a good submarine movie, and I had high hopes for this one, in which the great Ed Harris plays a Russian sub captain who takes aboard a covert ops team led by David Duchovny on a mysterious mission during the Cold War. Alas, early reviews have not been kind.

“A Place at the Table” (Sundance) — This revealing documentary looks at the 51 million people (including 1 in 6 children) who live with hunger in America. I’ll be doing a post-show chat after the 7:05 p.m. Tuesday showing, and it looks like, as a very special bonus, I’ll be joined by Capital Times food writer LIndsay Christians, who recently did the Food Stamp Challenge. Come join us! Here’s my review.

“The Frankenstein Theory” (Star Cinema) — Mary Shelley meets “Blair Witch” in this found-footage horror tale of a scientist in the Arctic out to prove Shelley’s tale was non-fiction, and the monster is out there. If handled well, it could be a lot of fun.

“Punishment Park” (UW Cinematheque, 4070 Vilas Hall, 7 p.m. Friday )  — The free on-campus film series presents a pair of films by button-pushing “mockumentary” filmmaker Peter Watkins with this disturbing 1971 film, in which antiwar protesters are rounded up for deadly exercises for the National Guard. It still has the power to shock over 40 years later. FREE!

“Death Rides a Horse” (UW Cinematheque, 7 p.m. Saturday) — Oh yeah. The Cinematheque’s big spring series of spaghetti Westerns (which will spill over into the Wisconsin Film Festival) begins with this violent classic about a teenager (John Phillip Law) searching for his parents’ killers with the help of an outlaw (Sergio Leone favorite Lee Van Cleef.) Free!

“Porco Rosso” (Chazen Museum of Art, 800 University Ave., 2 p.m. Saturday) — In this charming animated film from Studio Ghibli, a flying ace doesn’t let the fact that he’s turned into a pig keep him grounded. Free, but get there early, because the Ghibli series has been selling out every Sunday.

“Planet Terror” (Union South, midnight Friday and Saturday) — Watch the full version of Robert Rodriguez’s half of “Grindhouse,” in which toxic sludge turns folks into killer zombies. Weird they’re showing the other half, Tarantino’s “Death Proof” as well, no? Free!

“Broken On All Sides” (Union South, 7 p.m. Monday) — Co-sponsored by UW Athletics, this documentary looks at mass incarceration in America and the role that poverty and race play. Free!

“High Ground” (Union South, 7 p.m. Tuesday) — Vets for Vets co-sponsored the screening of this triumphant documentary about 11 veterans of the wars in Iraq and Afghanistan who climb a 20,000-foot peak in the Himalayas. Free!