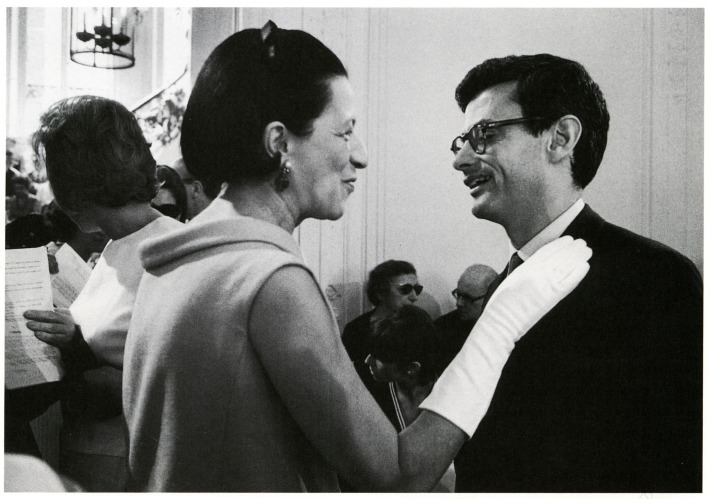 I had pen and paper in hand while watching “Diana Vreeland: The Eye Has To Travel,” ready to catch the money quote that would sum up the life and philosophy of the iconic fashion magazine editor.

Eventually, I gave up. Every sentence out of the woman’s mouth was eminently quotable, as if she was always being interviewed. That eternal public persona was appropriate, I suppose, for a woman who celebrated the beauty of artifice, who didn’t think a woman was truly herself until she was completely dolled up in her haute couture armor, ready to take on the world.

“The Eye Has To Travel” is an entertaining and brisk walk through Vreeland’s long life, mostly letting her tell her own story because, really, who would have the temerity to interrupt her? It’s out on DVD from EOne Entertainment, plays for free Tuesday night at Union South, the first of a series of fashion-related films co-sponsored by the Wisconsin Union Directorate and the Textile and Apparel Student Association.

The documentary uses as its backbone a transcript from a lengthy 1983 interview Vreeland did with George Plimpton at the age of 80. Soundalike actors read the transcript, so Vreeland gets to tell her own story of growing up in France during the Belle Epoque. (“Arrange to be born in Paris,” she advises. “Everything else follows quite naturally.”) She had a knack for being in the right place at the right time almost since birth, aside from summers spent in the Rocky Mountains as a girl. She loved horses, but the frontier life wasn’t for her.

From there, she spent a quarter-century as fashion editor of Harper’s Bazaar, then went on to become editor-in-chief of Vogue. She hobnobbed with celebrities, oversaw outrageous fashion shoots where money was no expense, and embraced high culture as well as low, the latest trends as well as historical costumes.

Producer and director Lisa Immordino Vreeland (Diana’s granddaughter-in-law) interviews dozens of her friends and colleagues, from Calvin Klein to Anjelica Huston, to paint a portrait of a woman who was joyfully driven. But the film treads lightly over Diana’s personal life; we learn that her mother was a difficult woman who treated Diana as an ugly duckling, but she firmly brushes off any attempt to psychoanalyze her.

The closest we get to Vreeland’s personal life is in her lifelong devoted marriage to Reed Vreeland. But when he dies in 1966, we learn that Diana wore white to the funeral. Even in her darkest hour, it seems, she couldn’t resist making a fashion statement.

The series continues next Tuesday, Feb. 19, with the fascinating documentary “Bill Cunningham New York,” about the eccentric and humanist photographer for the New York TImes’ Sunday Style section. On Tuesday, Feb. 26, the series will show “Funny Face” with Audrey Hepburn as a bookstore clerk who just happens to fall into the world of modeling.