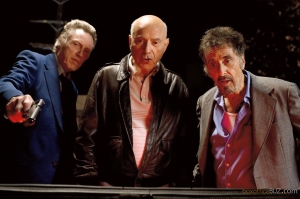 There are those actors who you’d watch in just about anything. They’re the ones who just seem to enjoy themselves while they’re acting, whether the movie around them is bad or not.

“Stand Up Guys” has three of them — Al Pacino, Christopher Walken and Alan Arkin — and just their presence goes a long way towards making “Stand Up Guys” a watchable movie. The movie itself doesn’t take it much farther, a sometimes ungainly mix of soft-boiled crime thriller and Viagra comedy.

But I enjoyed it well enough for the chance to see three old pros do their thing. “We’re all still here!” Pacino exults at one point, and their presence and vitality as performers is something to celebrate.

Val (Pacino) is a small-time criminal who has just gotten out of prison after a 28-year stint for murder and bank robbery. Meeting him at the prison gates is Doc (Christopher Walken), his old friend, who promises him a first day of freedom to remember. But if Doc is so happy to see Val, why does he have such haunted eyes, and a loaded gun?

“Stand Up Guys” is thin on plot, although I kind of wish the film had jettisoned the plot altogether and just had 90 minutes of the actors sitting around diners shooting the breeze. Instead, the movie labors through some wheezy setpieces, such as the old guys going to a brothel and showing the women there a thing or two, or stealing a new Dodge Challenger, mystified at the keyless ignition. The best part comes when Doc and Val bust their old getaway driver Hirsch (Arkin) out of a retirement home for some fun; Arkin’s presence adds a lot of zip to the film, but despite his equal status on the movie poster, he’s really just in the film for an extended cameo.

The pleasure of the movie comes in just watching the veteran actors volley lines back and forth, taking about past glories and present-day regrets. Pacino is his usual florid, outsized self, serving up raspy f-bombs like slices of prime rib. Walken is more contained and still, delivering serious lines as if they were funny and funny lines as if they were serious. They make a good odd-couple team, and if actor-turned-director Fisher Stevens pushes the geriatric comedy too hard at times, at others he’s wise to lay back and let the actors just work.

The film ends with a deeply dumb shootout — Stevens must have mistakenly thought that the audience, so used to seeing these guys play gangsters, wanted to see then back in action. But it’s when Pacino and Walken are back in inaction, chatting over surf ‘n’ turf or walking the streets telling old gangster stories, that “Stand Up Guys” lives up to the joy they so evidently still take in their work.

“Stand Up Guys” is now playing at Point and Star Cinema in Madison. R for language, violence, and sexuality.